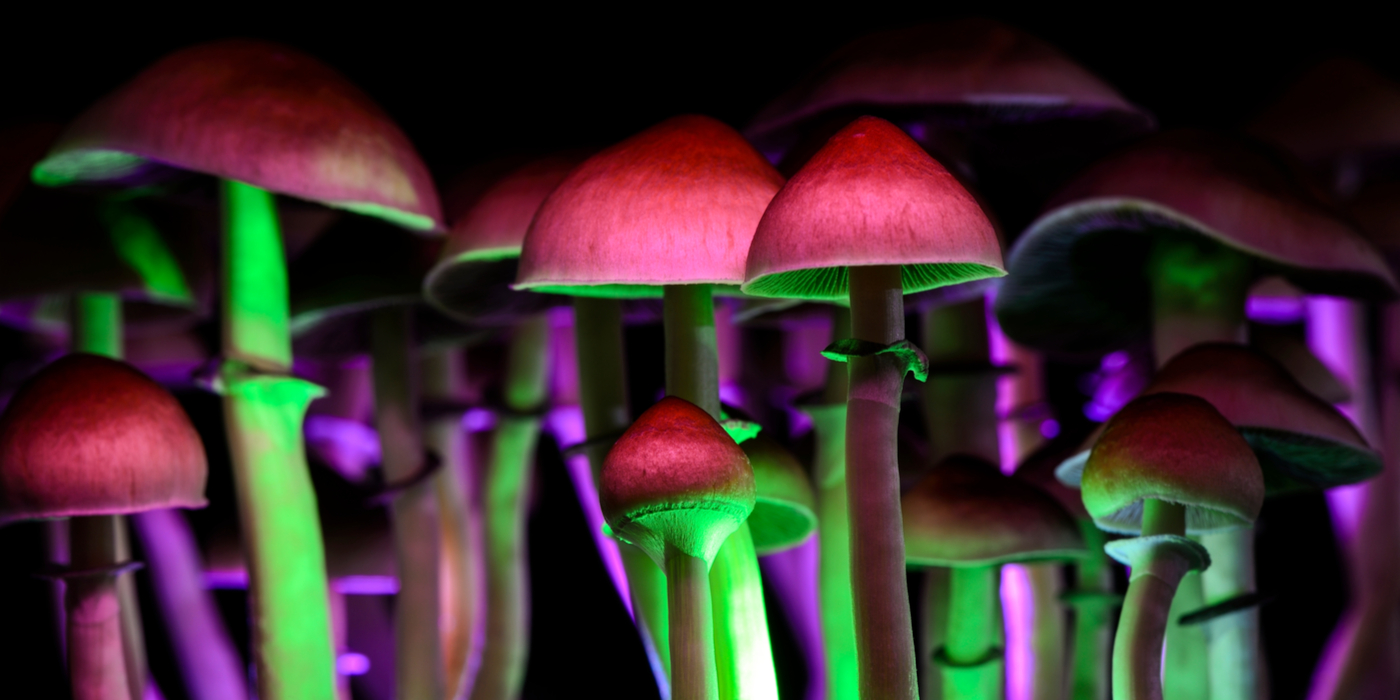 Magic mushrooms, shrooms, caps, flesh of the gods, etc…these are all names for psychedelic mushrooms, particularly psilocybin-containing mushrooms. The iconic amanita muscaria, or fly agaric, (the Alice in Wonderland mushroom) is another kind of hallucinogenic mushroom, but they contain a different compound called muscimol, which we will discuss in a different article. This article will focus on the psilocybin-containing mushrooms.

There are around 200 known species of magic mushrooms that contain psilocybin or psilocin. Perhaps the most commonly consumed species are:

Magic mushrooms have possibly been used since prehistoric times. Ethnobotanist, psychonaut and author, Terence McKenna, coined the “Stoned Ape Theory”, though it’s technically a hypothesis and not theory. The evolutionary records of early human showed a massive explosion in brain growth in what’s considered a relatively short time frame (1). The stoned ape theory basically says that as the climate changed and forests became grasslands, our prehuman ancestors were forced out of the trees and to walk on the land. With that came new sources of food. They would have found large fleshy psilocybin mushrooms growing out of dung and consumed them. The massive influx of psilocybin induced hallucinations could have very well been the catalyst for an expanded consciousness and self-awareness that led to the rapid brain development.

No one knows for sure if the stoned ape theory is true, but what we do know is mushrooms, and potentially magic mushrooms, have been used since as early as 9000 BCE. Rock paintings of masked “gods” covered in mushrooms indicate hallucinogenic mushrooms were used ceremonially (2).

Where Do Magic Mushrooms Grow?

Popular Culture and the Psychedelic Era

Most people might associate magic mushrooms with the psychedelic era of the 1960s and ‘70s. It got its start, when in 1955, New York banker and vice president of J.P. Morgan & Co., Robert Gordon Wasson, traveled to Oaxaca, Mexico to experience mushroom shamanism. There he met with Maria Sabina, a mushroom shaman of the Mazatec community. LIFE Magazine published the story of his journey, “Seeking The Magic Mushroom” in 1957 and it sparked massive interest with the hippies which in turn became the psychedelic counter culture of the ‘60s and ‘70s when they began to experiment with magic mushrooms.

Psilocybin and psilocin are structurally very similar to serotonin, the neurotransmitter that is responsible for contributing to feelings of well-being and happiness. Psilocin acts on the serotonin receptors in the brain (3, 4).

What Are The Medicinal Properties/Health Benefits of Magic Mushrooms?

Magic Mushrooms Can ‘Rewire’ the Brain

The psilocybin found in magic mushrooms actually causes a decrease in blood flow to particular areas of the brain called the default-mode network, or DMN.  It’s these areas, that when over active, are thought to be a root cause of mood disorders and depression.  Studies have found psilocybin to act almost as a ‘reset button’ for the brain (5, 6).

Watch out Chantix®, Nicorette® and “the patch”!  Magic mushrooms may finally be the answer to quitting smoking.  A study done on 15 participants who took psilocybin had a smoking cessation success rate of 80% (7).  Chantix®, made by Pfizer, advertises up to a 44% success rate (8).  No thanks, Pfizer.  We’ll stick to magic mushrooms.

Anecdotal evidence suggests that psilocybin and magic mushrooms cure more than just smoking addiction.  Many people claim to have been cured from cocaine addiction.  And that could totally make sense.  A study found cocaine addiction related to abnormal DMN functional connectivity (9).

Our hypothesis is that if psilocybin can reset the DMN, then it could cure addictions related to abnormal DMN function.

The bottom line:  Although the few studies and the anecdotal evidence show promise, more clinical research needs to be done.

As stated above, abnormal or overactive DMN is strongly linked to severe depression, anxiety and other mood disorders. Magic mushrooms seem to reset this network in the brain, leading to reduced symptoms of depression and anxiety (5, 6).

There are some common myths and misconceptions that we hope to discredit.

Let’s start by first defining “poisonous”.  According to Merriam-Webster, poisonous: producing a toxic substance that causes injury or death when absorbed or ingested.

Unless you are one of the few people that have an allergy to mushrooms, magic mushrooms are not considered poisonous.  There are no known major harmful health effects from consuming psilocybin mushrooms.

The Global Drug Survey has even listed magic mushrooms as the safest recreational drug.

There is a caveat, however.  Many deadly toxic lookalikes can grow in similar areas and under similar conditions as wild magic mushrooms.  The lookalikes contain no psilocybin and can cause major injury or death if ingested.  ALWAYS use proper technique and have a 100% identification before consuming ANY mushroom.  And if you’re ever unsure, just don’t eat it!

“All mushrooms are edible, but some only once.”
~Croatian proverb

Despite the fear-mongering of controlling agencies, there is no apparent increased risk of developing a mental health problem from using classical psychedelics like magic mushrooms, LSD, mescaline etc.

One study even showed that the use of magic mushrooms improved mental health and reduced the incidence of suicidal tendencies than those that never used psychedelics or magic mushrooms (10).

***If you feel depressed, suicidal or just “not right”, please talk to someone and don’t be afraid to ask for help.***

“Magic Mushrooms Will Fry Your Brain…”

Again, as stated above, there is no evidence that magic mushrooms cause any kind of damage to the brain whatsoever.  It’s actually quite the opposite, as current studies show psilocybin and magic mushrooms having a healing effect on the brain (10).

With all the wonderful benefits of magic mushrooms, there are some potential dangers.

As stated earlier in this article, be 100% sure you have positive identification regardless of any mushroom you might consume.  There are deadly lookalikes.  Please use proper identification practices, especially when wild foraging.

Having a “bad trip” is a potential danger.  A bad trip is usually uncontrolled paranoia or worry, among other dysphoric emotions.  This usually happens when the user is in a poor “set and/or setting”, with set being mindset and setting being location.  Having a “trip sitter”, someone experienced with psychedelics, is usually a good idea.

Magic mushrooms are illegal in most countries around the world.  There are a few legal loopholes in some places, but some of these laws can be convoluted and confusing.  It us up to the end user to know their local laws surround psilocybin and magic mushrooms.

References:
This article contains scientific references. The numbers in the parentheses e.g., (1, 2, 3) are clickable links to peer-reviewed scientific papers.

†Statements made on this website have not been evaluated by the U.S. Food and Drug Administration. These products are not intended to diagnose, treat, cure, or prevent any disease. Information provided by this website or this company is not a substitute for individual medical advice.